Read some of our cat adoption success stories and see what others have said about their adopted cats.

From Brody’s family: Brody celebrated birthday #4 yesterday!  He has adjusted well to life in the South; we’ve been here nearly a year.  He loves his screened-in porch and enjoys checking out the wildlife from his safe distance; he even had a close encounter with a bunny. He’s still very much interested in his basket of toys and delights in playing every day. 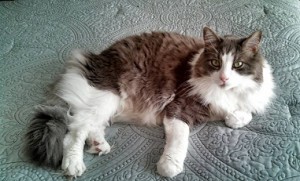 As always, we wish you continued success in finding forever homes for cats;     Brody has been a wonderful addition to our   family since day #1 and we can’t imagine life without him.

Yonce, aka Fern, was rescued from Newark shelter with her two sisters.  She is now known as Yonce and is living a life of luxury. 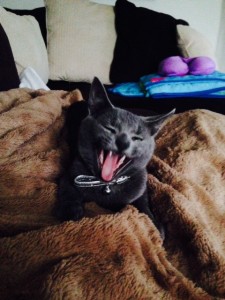 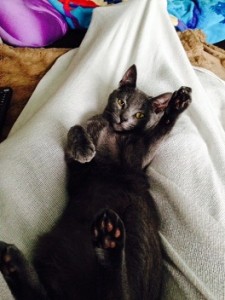 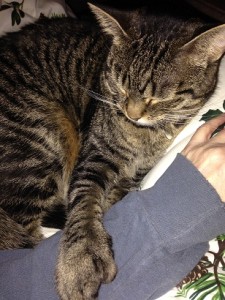 From Amber’s owner: “Today is Ambers Birthday and she is turning 2.  I thought I would just show you a few pictures from this year since last year. She is the best and I love her so much. She probably weighs about 12 pounds now. She has her yearly appointment at the vet in a few months and he will probably yell at me as he wants her around 10 pounds. I try. Hope all is well with you and you are finding many loving homes for your animals. The last picture is how Amber sits by my side and wants my one arm to put her paw over. She is so cute!” 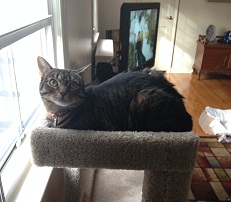 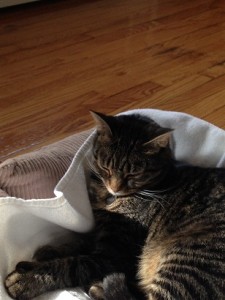 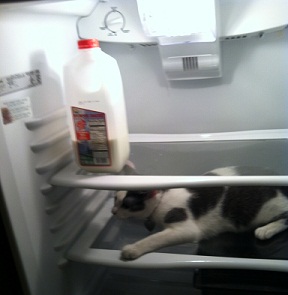 I have sent a few photos of BOB.  We are smitten!  He is absolutely an adorable guy!  Smart, funny and full of energy.  He plays fetch!  Loves our dog Jennie and they get along just great. He’s still a learning the ropes–living in a convent– had to ban him from chapel when he jumped on the altar during services!  One day during lunch he jumped onto the serving table and stuck his head in the butter— a silent meal!  But we were all laughing!  He is just such a JOY and so full of LIFE.  One morning I opened the fridge to get my milk for my coffee and he climbed in (photo below)—- there is no end to the hilarity.

Definitely a happy ending in the story of BOB! 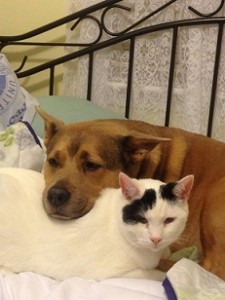 Hi!   We adopted our cat, Boo, 2 years ago during that terrible October snow

storm.   I wanted to share one of my favorite pics of him, with our dog, Sugar. What a wonderful addition to the family, that we didn’t even know we were looking for that day. 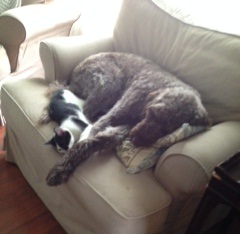 Salem was rescued from Newark shelter with 3 siblings.  Now he has a canine for a best friend 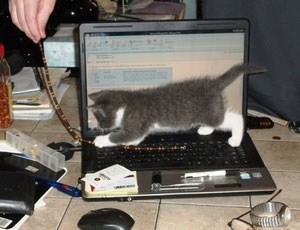 Rowdy was rescued from a street in North Arlington, NJ. A very nice man took him and his 3 siblings in and cared for them. He was able to find homes for all but poor Rowdy. So, Rowdy ended up in foster care with Cause 4 Paws. He loved playing with the other foster kitties and getting love from his foster mom, but it wasn’t the same as having his own family. Thankfully, Rowdy’s turn came when a family saw his picture and description on Petfinder. They came to one of our adoption events to meet him and decided he would fit well into their family.

This is what his new mom had to say about him several weeks later: ”Rowdy, now known as Charlie, is doing wonderfully. The first 48 hours or so were an adjustment (I think he missed his kitten friends), but he’s settled in nicely. We adore him. He may be the most patient and gentle cat I’ve ever met. My younger son picks him up and carries him around like a baby and Charlie seems to love it (or at least never lashes out at my son for disturbing him!). He’s not freaked out by the high activity (and sometimes noise!) level either. Charlie has settled into our rhythms and routines, and takes a turn cuddling with everyone when they each go to bed. He is a love and we’re so happy and lucky to have him as a part of our family.” 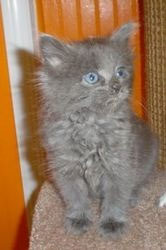 Harold was one of two tiny gray kittens that Cause 4 Paws rescued from a shelter in Bowling Green, KY, just in the nick of time. He stayed in foster care until a wonderful family saw his write up on our website and decided that Harold was the kitty for them. Harold’s foster mom brought him to meet the family and it was love at first sight. We recently received a heart-warming email telling us how fabulous Harold (now Derby!) is and how much they love him. This is what makes fostering worthwhile!

“I will never forget when you took the kitten out of his crate and showed him to me, he reached out and patted my cheek. I didn’t know then that it would be the first of hundreds of times he’d do that to me! It is just one of his unique traits, he loves to pet your face. The petting is closely followed by the rubbing of his cheek on yours. He is so openly affectionate! He loves receiving affection as well. His favorite is to be kissed on the forehead. He ‘grunts’ audibly with pleasure, when you do that to him. Whenever I think about how close he came to being euthanized at the KY shelter, I shudder! If it weren’t for the efforts of your rescue group, this wonderful little cat, so full of life, would never have graced our lives and brought us what I hope is many years of joy! No one would have ever had the chance to know him, and there is soooo much to know about him! I’m so grateful that he was saved and made his way to us! I’m not just saying this, but when my heart is so full because Derby is rubbing my face and purring, I do think of you and how your sacrifices made this possible for our family! After the extreme sadness of losing my two beloved cats (Sam’s buddies) in a span of six weeks in the fall of 2008, Derby and Charlie were the ultimate salve on our wounds. We hope they have long long lives with us, and when their time is over, we will adopt more rescue cats!” 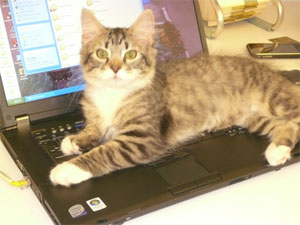 Blanche was rescued from a kill shelter and brought into foster care. She and her sister Sophie were as sweet as could be, but poor Blanche got apprehensive in new situations, so she never captured anyone’s heart at our adoption events. So, her sister Sophie was adopted immediately, while Blanche waited… Then the perfect home came along and Blanche (now Tabby) gets to live happily ever after in a wonderful new home. This is what Tabby’s new mom has to say about her:

”Tabby is a delight! She is even learning how to type.  She loves the sound the laptop makes when she hits the keys!  MacGregor is still not sure about her but they are being civil to each other. Still moaning and groaning and some hissing but no fights. I am exhausted  from giving them each extra attention all the time so they both feel they are the  most important. I had forgotten how much fun a kitten is. She is growing quickly and I suspect will be  a big girl. Thank you again for making this such a pleasant experience.  ” 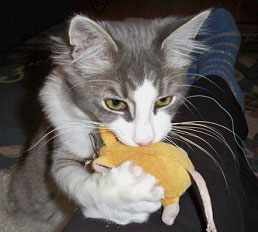 This strikingly handsome boy came to Cause 4 Paws as one of a litter of four stray kitties that were found in a backyard in Perth Amboy, NJ. They were lucky enough to be rescued by a kind woman who brought them into her garage to keep them safe and then called us. Brody, then called “Floyd”, was lucky enough to find the perfect home very quickly. Here is what Brody’s new family has to say about him:

“He truly is a joy to love. He always wants to be where we are … when we eat dinner, he hops up on an empty chair, peeks his head up and watches us eat for a few minutes and then curls up on the chair until we’re done. If we are in our office/weight room, he likes to lay on my lap on a pillow while I’m on the computer. He loves his toys and even plays fetch with his mice and his favorite, the chirping bird. Brody is not only affectionate and handsome, he’s packed with personality. We love him so. Thanks again for such a wonderful experience we’ve had with Cause 4 Paws. You may think Brody is the lucky one but we know that we are the lucky ones, to provide a forever home to such a special furry bundle of joy! We wish that each and every kitty could be as lucky as Brody!”

A huge thank you to Brody’s new family for giving him the best home we could have ever imagined.

“Here are some more recent pics of the ‘mountain lion’ I adopted from you…..lol.  He’s been doing really well. He’s at 10lbs 10oz now and still not fat, you can see how big he is next to my 55lb pitbull/shep mix Sammy. Chase sleeps with Sammy all of the time…” 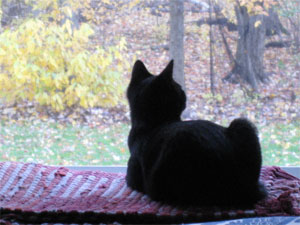 “We are so enjoying this little guy. The dog and the bunny are fast friends with him, too.”